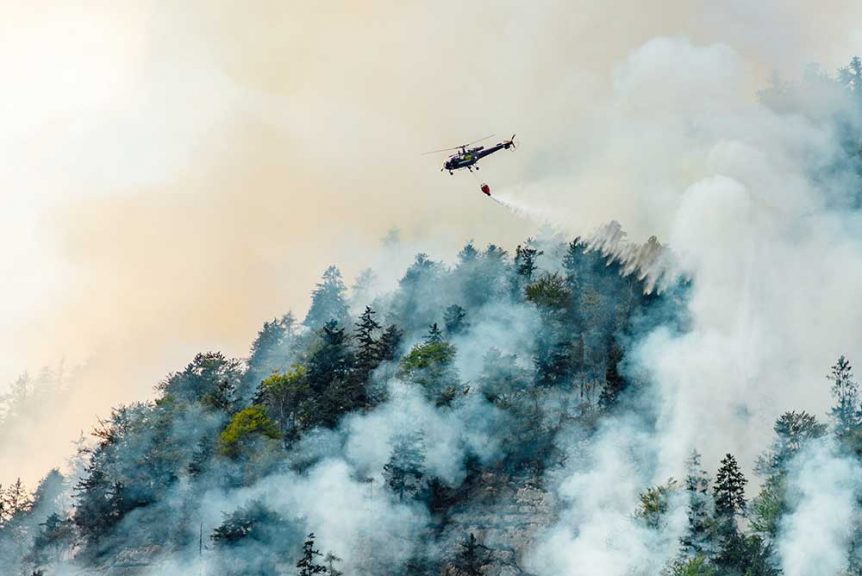 Forest fires are devastating natural disasters that can destroy large amounts of land very quickly. Due to their size and the speed at which they can spread, forest fires have been a force of destruction worldwide, most recently in California and Australia. In the U.S., there have been an average of 67,000 wildfires per year over the past 10 years.

All forest fires start with a spark. This spark may be human caused or naturally caused, with human-caused fires making up the large majority of all forest fires. Human causes may include cigarette stubs, bonfires, land-clearing fires, and other accidental fires. On the other hand, naturally-caused fires generally burn the most total area because they may not be detected as quickly and may not be contained as easily. Natural causes may include volcanic eruptions, lightning strikes, and the rare spontaneous combustion of dry sawdust or leaves.

All fires require fuel, oxygen, and heat, each part of the “fire triangle”, to start and to continue burning. As a result, the ideal environment for a forest fire is a dry forest on a hot and windy day. Western states and dry states such as California, Texas, New Mexico, and Arizona are at the most risk for wildfires. California and large parts of Australia have both recently experienced wildfires due to very high temperatures and dry conditions.

Forest fires increase in severity the higher up in the forest they burn. The three types of forest fires by vertical location are ground fires, which take place below the leaves, surface fires, which can be up to 1.3 meters high, and crown fires, which take place in the treetops. Crown fires are the most dangerous and can spread faster than the other types of fires. After reaching the tops of the trees, crown fires may be able to move from tree to tree and are difficult to extinguish.

The very first step in fighting forest fires is the notification that the fire exists. If a fire gets out of hand or a potential forest fire is spotted, it’s important to tell the authorities as soon as possible so they can start containing and extinguishing it.

After learning of a new fire, there are a couple of techniques that firefighters use to put it out. The main goal is to take away one or more sides of the fire triangle so that the fire can’t be sustained.

A firebreak is a strip of land that has been stripped of anything that a fire could use for fuel such as brush or debris. Firebreaks are built around the fire to prevent it from spreading further. This is the job of firefighters called hotshots who work in teams to contain the fire.

Backfires may also be used to get rid of any fuel in the fire’s path. A backfire is a fire that is meant to burn up fuel so the larger fire is contained. These fires are set by the ground crew who are able to contain the fire.

Planes called air tankers are able to drop thousands of gallons of water and fire retardant from above. Helicopters can also douse the flames by dropping water bombs and by getting firefighters to the site of the fire.

While the larger fire is being extinguished from above, specialized firefighters called smokejumpers supress small fires on the ground so they don’t grow in size. Smokejumpers are able to get to the small fires away from the action by jumping out of planes.

For more information on wildfires and how to stay safe, visit American Red Cross Wildfire Safety.